The COC Orchestra takes centre stage in this illuminating video series hosted by Music Director Johannes Debus. Each episode features Debus in conversation with a member of the orchestra as they share candid anecdotes and unique musical demonstrations. 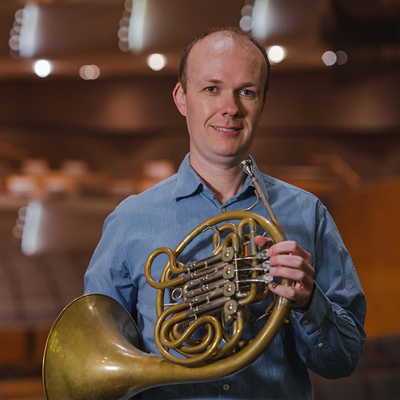 Scott Wevers has been a member of the National Ballet Orchestra horn section since 2006. As a freelancer, he has performed with many symphony orchestras including the Toronto Symphony Orchestra, Kitchener-Waterloo Symphony, Hamilton Philharmonic and The Quebec Symphony Orchestra. As an early horn specialist, he has performed regularly with Tafelmusik since 2001, participating in several of their tours and recordings (including the complete Beethoven symphonies). In 2019 he had the privilege of playing Mozart’s Horn Concerto No. 4 as soloist with Tafelmusik for Jeanne Lamon’s farewell concert. Other early music ensembles for which he has played include Aradia (Toronto), Ensemble Caprice (Montreal), Apollo’s Fire (Cleveland) and American Bach Soloists (San Francisco). This unusual season marks the second year of his appointment as Principal Horn of the COC Orchestra. 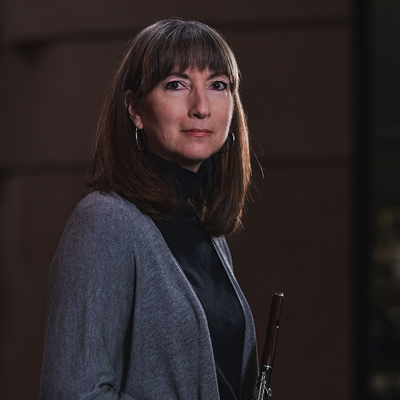 Shelley Brown joined the Canadian Opera Company Orchestra in 2001. She has appeared in the COC’s Free Concert Series in the Richard Bradshaw Amphitheatre Chamber Series as a soloist and with members of the COC Orchestra’s wind section and COC Music Director Johannes Debus. As an orchestral musician, Brown has toured across Europe and North America. Notable performances include the Edinburgh Festival (1993 and 2002), Brooklyn Academy of Music with the COC, and Lincoln Center with the National Ballet of Canada (NBoC). She currently holds the position of flute and piccolo with both the COC Orchestra and the NBoC.

Brown’s musical interests outside of her orchestral work have led to various collaborations. She can be heard on the 2003 JUNO Award-winning Blue Note recording “Life on Earth” by internationally acclaimed jazz pianist Renee Rosnes. Her lyrics for music written by Rosnes have been published by Second Floor Music and continue to be performed and recorded by various artists.

Brown was born in Peterborough, Ontario and graduated from the University of Toronto where she studied under Nora Shulman and Jeanne Baxtresser. 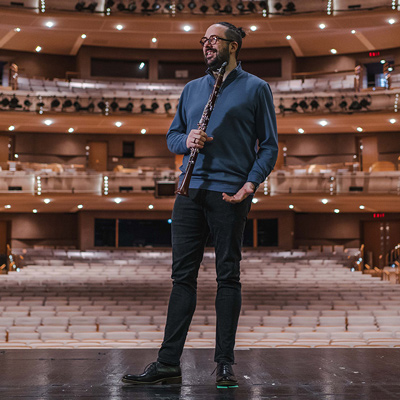 Principal clarinetist of the COC Orchestra and the Hamilton Philharmonic Orchestra, Dominic Desautels’s extremely varied career has led him to perform internationally in a broad variety of musical genres that span from classical to jazz and contemporary music.

He made his debut as a soloist with the Toronto Symphony Orchestra at age 21 and, during the same season, as guest principal and substitute clarinetist.

His main clarinet teachers include Joaquin Valdepeñas and Jean-François Normand, and more recently, James Campbell became an important mentor. Upon graduation from the Université de Montréal in 2008, he became principal clarinetist in one of South America’s top orchestras, the Orquestra Filarmônica de Minas Gerais in Brazil, followed by a five-year tenure at Symphony Nova Scotia in Halifax before joining the COC Orchestra in 2017. Desautels has won numerous music competitions over the years, notably becoming the first clarinetist to win a prize at the CMC International Stepping Stone competition in its four decades of history.

Desautels is a guest artist and faculty at Scotia Festival of Music and the Interprovincial Music Camp, and Adjunct Assistant Professor of Clarinet at the University of Toronto. 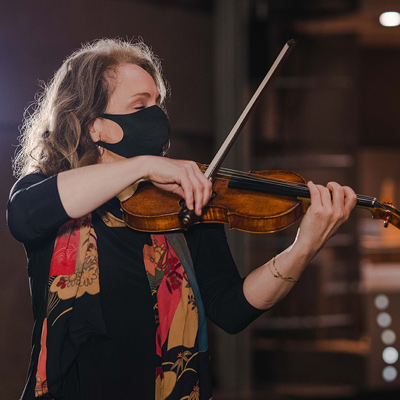 Best known as the concertmaster of the Canadian Opera Company Orchestra, Marie Bérard is also a sought-after chamber musician, soloist, recording artist and teacher. She is a former member of the Toronto Symphony Orchestra and has performed with a variety of smaller ensembles such as Amici, ArrayMusic and New Music Concerts. Bérard is also a member of Trio Arkel as well as the ARC Ensemble which has toured in Europe, China and the United States and was nominated three times for a Grammy Award for their Sony recordings.

Highly regarded as an interpreter of contemporary music, Bérard has released a recording of a concerto by Henry Kucharzyk for violin and brass ensemble on the Opening Day label and can be heard on numerous CBC Records with the COC Orchestra.

Bérard is a regular performer at numerous chamber music festivals, notably the Strings Music Festival in Colorado and the Mainly Mozart festival in San Diego.

If it is possible for you at this time, please consider making a donation to provide vital support to the COC as we continue to develop innovative new digital programming and prepare for our return to the stage.

For more digital events and opportunities, sign up for our monthly eOpera newsletter.